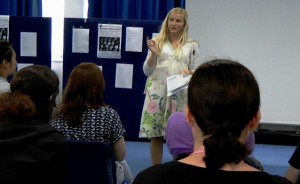 Euro-Mernet team members welcomed the guests with a brief introduction of the activities of the organisation and the evening programme as well as the brief highlights about the state of refugees and asylum seekers with a particular focus on the UK. Guest organisations also had the opportunity to display their publications in the info gallery area.

Among the free publications available, a recent leaflet by the Amsterdam-based pan-European network UNITED for Intercultural Action was highly significant. The leaflet, entitled “The Fatal Policies of Fortress Europe”, consisted of facts and figures about the deaths of asylum seekers during their quest for a safe haven in European countries. UNITED has been producing such reports and organising events and campaigns to highlight the ordeal of refugees and migrant communities across Europe since 1993.

Local guest organisations including Health Watch Brighton & Hove and Refugee Radio also briefed the guests about their activities and their forthcoming events in Brighton. 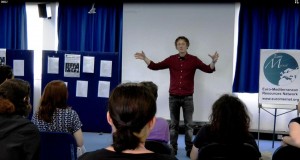 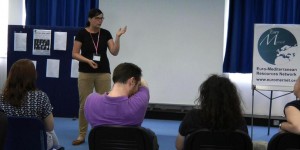 Guests enjoyed a wide range of Mediterranean food and drinks as well as examples of refuge poetry compiled by the Euro-Mernet team. The poems related to refugees included famous pieces like “September on Jessore Road” by the legendary poet, late Allen Ginsberg and numerous poems written by refugee adults and children from across the world.

The event concluded with the screening of the movie Whistleblower by director Larysa Kondracki and starring Rachel Weisz. The movie was based on a true story and it tells about the sex-trafficking of kidnapped young women from central and eastern Europe and also vulnerable girls in search of safe asylum. Some of the cases described in the movie were brought to the attention of the UN Police. 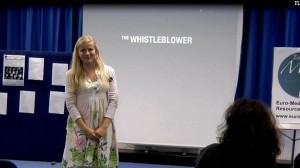