Radical Bank of Brighton and Hove: redefining the spirit of local communities 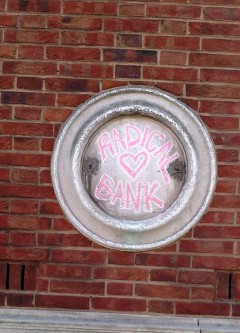 Radical Bank of Brighton and Hove: redefining the spirit of local communities

By Carlotta Mingardi and Elisa D’Antoni

As the latest addition to the tradition of passionate activism in the city, Radical Bank in Brighton and Hove, a two-week old activist initiative that hit the news headlines in June following their occupation of the disused former Barclays Bank building on the corner of Preston Road, Brighton, gave out interesting messages in a series of public statements on their difference from other past examples of occupying buildings:

“Today proves that the possibility of resistance still burns strong amidst the grey tides ebbing at Britain’s shores: it proves that we can share a radically alternative notion of community. Demonstrating that in the same way we can reclaim space, we can this use space to reclaim human relations with one another and this planet we share: we can change what this world means to us.”

Solicitors acting on behalf of Barclays took legal action against the Radical Bank initiative and at the court hearing on Tuesday 17th of June more than forty people were present to offer their support to the activists. Court decision was in favour of Barclays and the activists left the building peacefully. Even after their eviction from the building, the Radical Bank’s supporters on their Facebook page continued to increase and remained firm.

Whilst the Radical Bank is not on the corner of Preston Road anymore, we decided to have an in depth look at this project, which apparently differed significantly from similar kinds of occupation actions, mostly due to its deep and direct engagement with the members of the community.

After days of observation and talks with some of the people involved in the movement, it is safe to state that it was clearly not an ordinary occupation. If it is true that the people who occupied the old Barclays in London Road are ordinary people, counting a wide range of “workers, the unemployed, students and migrants” (as they defined themselves), their aims are not. Born after the demonstration “End Austerity Now” of the last 6 June, this movement aims to counter the cuts of the government in many different fields like education, subsidies and National Health Service (NHS) by creating an alternative model of community. In order to do that they conjugated a deconstructive approach necessary to develop an analytical and informed criticism of the current Government’s policies with a constructive approach to build a suitable alternative to present reality. These two steps are both as necessary as vital to the building of a movement of dissent, and they nurture each other in a constant struggle whose end goals is to provide a suitable shelter for homeless, a centre for redistribution of free food, a community centre from the community for the community and a free space of assembly.

Communication revealed to be an essential pillar of this movement: in the very first moment of assembly, it was crucial for the people coming from different backgrounds and political ideology to see if they could share a path: unlikely from one may think, anarchists, Marxists, non-aligned people, students, workers, migrants and unemployed can coexist and can work together pretty well. Left wing groups can be united (“YES, they can”), if guided by a common goal. Criticism to our society are well posed and eloquently discussed, as in the long article in which it is addressed the issue of gentrification. One of the goals of the movement in choosing to “liberate” this specific building is to fight the phenomenon of gentrification of our society. In their blog, Radical Bank activists refer in particular to the theory of Gentrification, as conceived by the Marxist sociologist Ruth Glass in the 60s, and its future interpretations. The Radical Bank activists want to denounce the economic and social pressures that certain middle-class professionals (the new “gentry”) who see in the housing and areas of the traditional working-class a gain and investment opportunity, put on the poor people until the moment they are forced to displace. This process has resulted in a deep transformation of the housing stock and demographics of many areas, of which Preston Ward represents an example in Brighton.

So, what’s exactly their idea of “liberating a stolen place” from the community? How did they want to use this space? The first time we visited the Radical Bank, we saw that there was a huge potential for different activities to be proposed. In spite of the quite cold temperature that we found in there, the ambience was pretty warm thanks to the coloured balloons all around, painting material almost everywhere, paintings on the walls and an overall presence of creativity marks. Then, what makes this place so welcoming it’s also the presence of some sofas, a table with biscuits and tea and the library corner. Anyone can just drop in, pick a book and start reading it while someone else will certainly come and offer you a mug of tea or something to eat! But it’s not just a quiet and relaxing place where you can also meet new friends. On Sunday 14th the Radical Bank’s activists organized an Open day to show the potential activities that can be run. They hosted various workshops from the first aid to digital security, some film exhibitions in the cinema room that they created in the social centre, solidarity talks about the immigration issue and the current situation in Palestine. They also served free vegan food and invited people to pick the food they might need. We can say that it’s a space for socialization, reflexion, skills-empowerment, learning, confrontation, inclusion: something that we noticed from the first time we visited the place is the attention to avoiding the “labelling” of different kind of people. They are very careful with the psychological side of everybody in the building, which means that nobody is going to be judged on the basis of his or her sexual orientation or “identification”. In fact, there’s also someone with experience in mental health care, who has volunteered as a “go-to person”, so people can speak confidentially about anything they want to.

The work they have done until this moment is just praiseworthy in terms of material work, because “The building was a complete tip on Saturday [6th June]. People cleaned up loads to begin with, as there was clutter scattered around everywhere”, and also in terms of democratic practices, because “The meetings are democratically led with a facilitator keeping tabs of who would like to speak next, and a minutes-taker writing notes on decisions that have been made and things people have said”. And, also in terms of security, because many people often are afraid of the circulation of drugs and alcoholics in an occupied space, the “radicals” have assured on their blog that they have “a couple of social rules on tolerance and a no-drug and no-alcohol policy”. As we witnessed ourselves on Sunday, there were some children with their parents enjoying the space in complete safety!

This is a short and partial picture of what the Radical Bank meant for the community of Preston Circus and anyone in Brighton & Hove: a space to be preserved and a place of which everybody is called to take care, together.

Fast rewinding and going back to the junction between Edward Street and William Street, where the hearing took place at the law courts on 17 June: Supporters of the Radical Bank gathered together early in the morning, at 9am. Once passed the controls, all of us have been allowed to assist to the decision of the Court, and despite the justified anxious wait for the unknown, the morale stayed high. However, no one could tell what the decision of the Court would have been in terms of time left to the movement before eviction. The actual contention saw two representatives of Radical Bank opposing a Barclays lawyer: however, given the recent claims of Barclays on the building the outcome was to some extent predictable. Nevertheless, the movement has provided in the last week a wonderful example of solidarity, cohesion and ability to devolve time and energy to a common cause. Most of the people involved do have a shelter and a job, but this does not mean that they accept a society that sees and enforces an unequal allocation of resources and a theory which determines someone’s value depending on his or her level of production. Some of the people involved are unemployed, but they decided not to accept a government that turns its back to them and to the most vulnerable groups within the British society.

Reading what Herbert Marcuse used to say about the revolutionary power of the youth and student class, we would like to add that a cultural revolution is successful (to a greater extent) when large part of the population is involved and students are able to create a network with all classes. This is what happened in France in May ‘68 and in Italy from ‘69 throughout the 70s, until the movements’ cooptation into the standard political game. And even if we can agree with Darwin that in nature only the strongest survives, we have built a society purposely in order to take care of the vulnerable and don’t let them die in the jungle. What should be the purpose of human society, if not that?
Luckily enough, in Brighton and Hove there is a wide range of people who have not forgotten but further recreated the deepest meaning of “society” and “community”. Stay tuned, we will see them for a long time taking care of every abandoned building in Brighton and Hove and constructing day by day a suitable, enjoyable and human alternative to the current status quo.

Perhaps the first couple of lines from the lyrics of this song can represent a definition of the “statement of reason” as to why Radical Bank activists chose the path they walk upon: “Colour my life with the chaos of trouble, ‘cause anything’s better that posh isolation.” 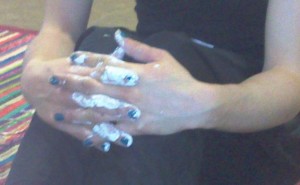 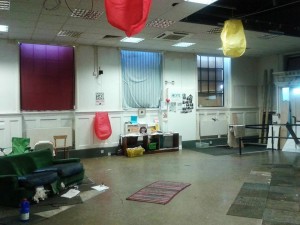 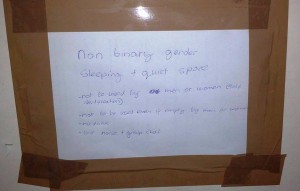 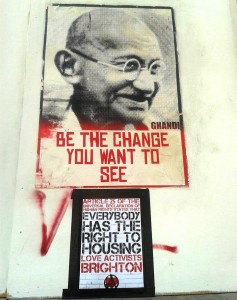 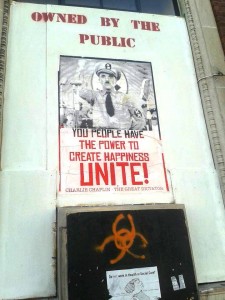 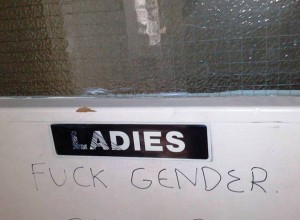 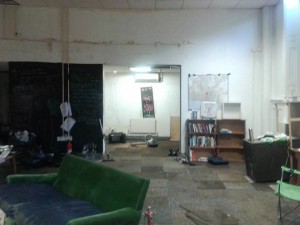 About the author
Related posts
The Brighton Pride: a festival a city should be proud of
5th August, 2015
Gianluca Solera interview: Call for a “Mediterranean International Citizen”
26th June, 2015
Categories
Blog Archives